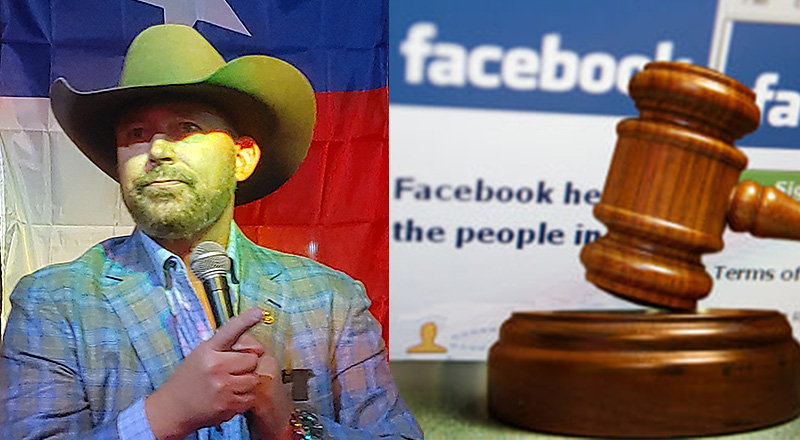 Chad Prather, Gubernatorial Candidate for Governor of Texas, moves to file a lawsuit against Facebook after receiving a 7-day ban one week before Republican Primary.

In March of 2021, Governor Abbott publicly made it seem as if he wanted to protect free conservative speech on Facebook, yet he was working quietly with Facebook with hopes that they would soon build a second data center in the state of Texas. He gave them exclusive perks to build, paid for with cash from Texas taxpayers’ wallets. This included millions of dollars in incentives. Deals were struck, hidden from the taxpayers.

The Tech Transparency Project filed an open records request that sought communications between Abbott’s office and employees of certain technology companies, including Facebook. Instead of releasing the records, Abbott’s office asked Attorney General Ken Paxton to intervene on Facebook’s behalf.

President Trump endorsed Governor Abbott while asking Gov. Abbott to call for a third special session to address election integrity. However, Abbott has not fulfilled his end of the agreement.

Eight days before the Republican Primary, Chad Prather, a social media influencer with a large conservative following, and a Gubernatorial Candidate running to unseat Governor Abbott has been banned from Facebook for 7 days and cannot communicate with his voters on one of the largest platforms available to him. When Prather reached out to Facebook, the Meta Team forwarded on his email to Meta team members who “would get him any help related to the Governor race”. Facebook’s reference to Prather running for governor was suspicious at best considering the dispute, review request, and the ban had nothing to do with the Chad Prather campaign.

The Texas Senate recently passed the Freedom from Censorship Act (Senate Bill 12), filed by Senator Bryan Hughes (R-Mineola), to protect Texans’ right to free speech on social media platforms. It is time to use this law.

Chad Prather has officially decided to take legal action. A petition is being filed against Facebook today, February 24th. This request will be filed with the Tarrant County Judge to issue a temporary restraining order with instructions to reinstate Chad Prather’s account immediately.